The Measure of Love

How self-righteousness hinders our fellowship—with God and others

When the pastor’s wife stood in front of the women’s Bible study group and asked for childcare volunteers to help a single mom named Kathy, my hand shot up.

Wouldn’t it be great to minister to this struggling little family? I thought. I can really show them the love of Jesus.

I knew who Kathy was. We all did. She stood out in our well-to-do suburban church like a wild poppy that had improbably bloomed in a perfect field of pastel daisies. Kathy always had dirt under her fingernails from her third-shift job at a printing house and smelled of cigarette smoke and sweat. Before she came to the church, she and her two children had fled because of an abusive marriage. At one point, she and the kids were living in her ancient car, bouncing from shelter to shelter. She had significant learning disabilities, but with the help of a shelter social worker, she eventually was able to land a steady job and rent a small apartment in our town.

She stood out in our well-to-do suburban church like a wild poppy that had improbably bloomed in a perfect field of pastel daisies.

Kathy had come to faith in Jesus by watching a few favorite Christian television programs. She soon realized that attending a church could help her grow spiritually and assist her as she sought to disciple her children. When she arrived at our congregation, our church leaders looked for ways to offer practical aid. Childcare expenses took a huge bite out of her small paycheck, so they suggested some volunteers lend a hand.

The Thursday morning Bible study group had taken on a variety of other projects through the years: gathering items for the food pantry, helping to decorate the church for women’s teas, and bringing casseroles to new moms. I suspect most of us thought of Kathy as just another project. Our group consisted of middle- and upper-class suburban stay-at-home moms. Because Kathy wasn’t one of “us,” I used my privilege to measure Kathy’s faith. I saw myself as the spiritual giant—or at least the stronger, more mature believer—in our relationship.

I don’t think I was the only one who felt this way. Though none of us would have voiced it, I had the sense among our group that we saw ourselves as Kathy’s rescuers. When we discussed her, it was always in terms of our heroics—not our relationship with her.

We called it compassion, but our relationship with Kathy and her children was built on pity. The words are often used interchangeably, and both are rooted in a feeling of sorrow at the suffering of another. However, in contemporary usage, pity often carries with it a sense of superiority toward the one who is hurting. Writer Stefan Zweig said pity is “really no more than the heart’s impatience to be rid as quickly as possible of the painful emotion aroused by the sight of another’s unhappiness, that pity which is not compassion, but only an instinctive desire to fortify one’s own soul against the sufferings of another.”

I put a lot of effort into looking like a good Christian—and as I did, my compassion for others quietly drifted into pity.

In contrast, Scripture roots God’s compassion toward us in His character: “Gracious is the Lord, and righteous; yes, our God is compassionate” (Psalm 116:5). While our holy, all-powerful God has every right to look down on us, He instead chose to be with us (Matt. 1:23). Every act of Jesus’ ministry flowed from His compassion for us—from His healing of those who were suffering, to His confrontations with hypocritical religious leaders, to His death on the cross.

I’d always imagined I was just like the humble, broken tax collector in Luke’s parable (Luke 18:9-18). In this story, a deeply contrite man, overcome by the realization he’s sinned against a holy God, is contrasted with a religious elite whose show-offy prayer trumpets his moral superiority over everyone around him. I’d first come to God as the tax collector had. His prayer was mine: “God, be merciful to me, the sinner” (Luke 18:13). Over time, however, my inner Pharisee surfaced. Though I didn’t try to make a show of my righteousness, I’d gradually lost my compassion for other sinners like me. I put a lot of effort into looking like a good Christian—and as I did, my compassion for others quietly drifted into pity. Pity distances itself from others; compassion draws near.

Thus, I thought I was showing compassion to Kathy by offering her free childcare, but I soon discovered that my motives were rooted in the same arrogant pride as that of the Pharisee. I saw myself as a rescuing hero who’d come to save Kathy’s day.

My first inkling that my patronizing script toward Kathy might be all wrong came when she brought her kids over for the first time. She arrived a few minutes early, sat down at my kitchen table, and interviewed me as if she were hiring me for a nanny job: “Where did you grow up? How would you describe each of your kids? How do you handle picky eaters? What kind of discipline do you use in your house?”

Though Kathy was glad for the offer of free childcare, she was also street smart and rightly suspicious of a perfect stranger who’d volunteered to watch her kids. She was very protective of them, as the family had been through a lot together. I was more than happy to answer her questions, but her sense of caution jostled me a bit. After all, I was a good church woman who’d gone above and beyond the call of duty to help her out. Somehow, she didn’t seem quite as grateful as I thought she should. I didn’t realize I had a script in mind, filled with what I deemed appropriately grateful responses from Kathy—until she veered from that script by being a concerned parent. 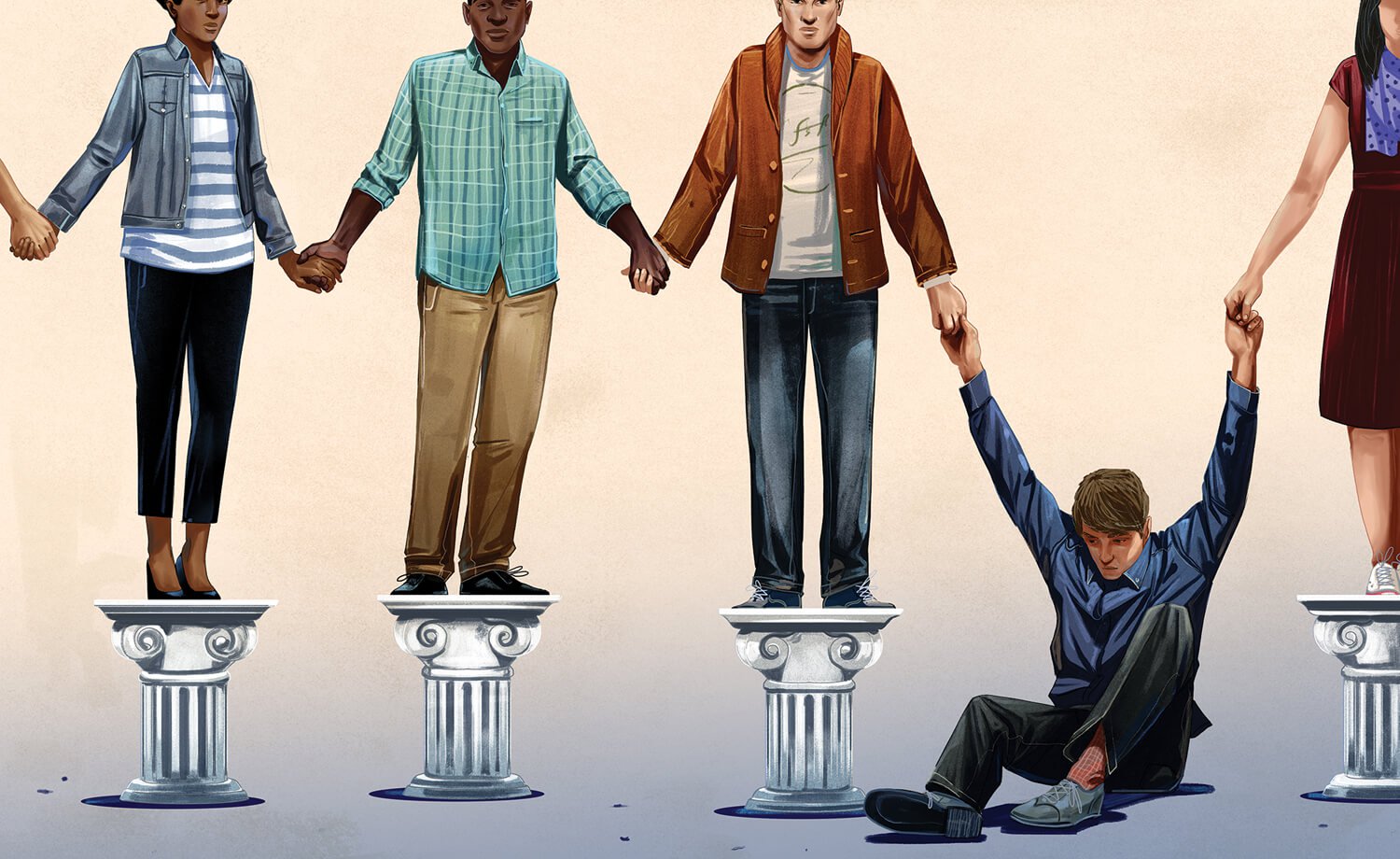 Jesus told us that when we give to others, we’re not supposed to let the left hand know what the right hand is doing (Matt. 6:3). I learned it’s impossible to obey Him in this while I’m clutching an expectation-filled script in one of those hands.

As I got to know Kathy over the next few months, my pity slowly turned to remorse. Kathy modeled in-the-trenches discipleship for me. She struggled to read but committed herself to learning about the Bible by listening to sermons on TV and radio. She prayed with simplicity and great expectation. She delighted in her ongoing experience of God’s forgiveness in a way that was totally incongruous with her rough exterior. She received His pure compassion from others, allowing the Holy Spirit to strain toxic pity from it.

She wasn’t a fool, however. It turned out that she was on to us. When I was experiencing conflict with someone at church, I opened up to Kathy because I’d grown to value her straight-shooting instincts.

“Your ‘friend’ isn’t really much of a friend, if you want my opinion,” she said. “She treats me like I’m not as good as she is. A lot of those ladies do.” She shrugged, letting the thought of the indignity roll off her like rain. “Oh well. I’m glad you’re not like them, Michelle.”

A lump formed in my throat. I stared at the ground for a long minute before I responded. “I think I’m more like them than you realize.”

She didn’t seem quite as grateful as I thought she should.

She shook her head. “No. I’m not your project. I’m your friend,” she said.

She gave to me in that moment what I thought I’d been giving to her all along. She offered me true compassion, the overflow of the mercy she’d received from Jesus, her Rescuer. That mercy unmasked me, revealing to me the Pharisee I’d become.

Kathy was always an outsider at the church. She was not the only one, I discovered, as I stepped back and began looking at things from her vantage point. While she remained a project to most in the congregation, she had a handful of friends. I was honored to be numbered among them.

When our family moved away, she and I eventually lost touch. Then a few years ago, I learned that she’d passed away after a brief, ferocious bout with breast cancer. By that time, her beloved kids were grown and had long since flown from her humble nest.

When I reflect on our years at that church, I don’t think I could tell you much about most of the sermons I heard or the things I learned during the Bible studies I attended. But I can tell you that because of Kathy, I discovered pity comes with its own prideful measuring tape rooted in power or privilege. Biblical compassion, however, is as limitless as God’s perfect love for each one of us—even those of us who, perhaps like a Pharisee, mistake ourselves for a hero.

Gracious is the LORD, and righteous; Yes, our God is compassionate.

``BEHOLD, THE VIRGIN SHALL BE WITH CHILD AND SHALL BEAR A SON, AND THEY SHALL CALL HIS NAME IMMANUEL," which translated means, ``GOD WITH US."

And He also told this parable to some people who trusted in themselves that they were righteous, and viewed others with contempt:

``Two men went up into the temple to pray, one a Pharisee and the other a tax collector.

``The Pharisee stood and was praying this to himself: `God, I thank You that I am not like other people: swindlers, unjust, adulterers, or even like this tax collector.

`I fast twice a week; I pay tithes of all that I get.'

``But the tax collector, standing some distance away, was even unwilling to lift up his eyes to heaven, but was beating his breast, saying, `God, be merciful to me, the sinner!'

And they were bringing even their babies to Him so that He would touch them, but when the disciples saw it, they began rebuking them.

But Jesus called for them, saying, ``Permit the children to come to Me, and do not hinder them, for the kingdom of God belongs to such as these.

``Truly I say to you, whoever does not receive the kingdom of God like a child will not enter it at all. "

A ruler questioned Him, saying, ``Good Teacher, what shall I do to inherit eternal life?"

``But the tax collector, standing some distance away, was even unwilling to lift up his eyes to heaven, but was beating his breast, saying, `God, be merciful to me, the sinner!'

``But when you give to the poor, do not let your left hand know what your right hand is doing,