If anger is an unwelcome houseguest, why do we keep inviting it back in?

Last fall was a busy harvest season at our fish camp in Alaska. The garden, a pathetic mess of weeds and rocky soil, contributes almost nothing to our gleanings, but the salmonberries had somehow managed to be plentiful. Afternoons were spent foraging through brambles, taking kayak trips to gather berries and fireweed, and hovering over pots of simmering jam. Salmon came through the door every day as well, each of which had to be filleted, smoked, and canned. Every case of winter provisions added to a tower of God’s goodness and abundance. One day, though, in between canning, the feeding of a full table, the loving of children, the mending of nets, and the gathering of fish, anger came to me as if an unbidden houseguest—and at the worst possible time: during a week of emergencies.

The first crisis occurred when my husband and I were traveling back by boat from the village—wind and gray water whipping around us, the skiff pounding through every wave. And then, in a moment, we were out of gas. Dead in the water with more than a mile to go. We turned to the oars, both of us coordinating our awkward strokes to keep off the cliffs. If the wind had been blowing any other direction, we would have been lost for hours. Or worse. 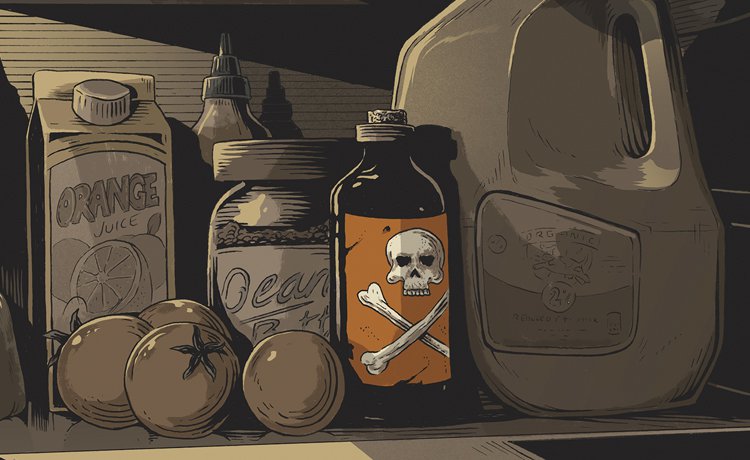 A few nights later, I trotted up the gravel hill and through the entryway of our house, and suddenly I couldn’t breathe. My eyes stung, and I could hear a strange hissing sound. I stood for a few seconds, searching for the source, then burst through the door and back into clean air. I knew what it was: My 30-year-old refrigerator was leaking ammonia. At high enough levels, it kills people. I shuddered in horror at the thought of it happening in the night, while we were sleeping. (Imagine that on your tombstone—“Killed by a refrigerator”!)

But that wasn’t all. There was one more crisis on the water that same week. Another out-of-gas moment, except this time I was alone. And this time my husband had assured me there was plenty of fuel. “No need to get more. Trust me!” he had said before I set off. I was eventually rescued and towed home by a neighbor who saw me drifting out in the bay. But in that emergency, the anger arrived, giving me strength to row a 26-foot boat against the wind, helping me flag down a passing boat. Once I landed safely at my island, it was anger that propelled me up the long hill to my house.

So I invited it in. I told it—breathless and red-faced—how much danger I’d been in. How it was all someone’s fault. And before I knew it, I was opening every door in my mansion of memory, showing anger rooms spilling over with hurt. When I was done, I gave it my feather bed and served it tea in china cups, taking notes while it told me, smiling between sips, what I’ve been doing wrong. How I’ve let injustices pass. The ways I’ve let myself be robbed of power and rights.

I listened because there is a righteous anger that brings life out of death. I know that it can call out abuse and oppression and can lead to the goodness and justice that God desires. But the longer I let my anger speak, the more  I squirmed. I heard it promising Survival, dear! and Total happiness, honey! but when I leaned in to listen, I heard a hissing like the ammonia seeping from my fridge.

Even those times when the scales do not balance out, anger still destroys the one who hosts and feeds it, then leaches into relationships, and even into the soil and air around us.

After a full dose of anger’s company, I went to bed—and was worse for wear because of it. The next morning, my face was frozen in deep frowns and ugly angles. I told myself, This is what happens when you sleep with bitterness all night. I realized then that my guest was not there to save me, but to suffocate and kill me. I looked over at my husband, whose face was soft in sleep. He turned, waking, and smiled at me. I pictured my sons in their bedrooms below. Would I spend another day in such toxic company, carrying anger through the rooms of my house, down to the beach, and into the world outside our front door?

That morning I read from the book of James: “God’s righteousness doesn’t grow from human anger. So throw all spoiled virtue and cancerous evil in the garbage. In simple humility, let our gardener, God, landscape you with the Word, making a salvation-garden of your life” (James 1:20-21 MSG). And reading those words, I remembered what  kind of life I wanted to live.

The words of God cut mercifully, like pruning shears, and I determined to kick anger out of my house. I let go of my fists, my rights, my wrongs, remembering, Forgive as you have been forgiven. I acknowledged that I’m guilty of as many mistakes as my husband. Even those times when the scales do not balance out, anger still destroys the one who hosts and feeds it, then leaches into relationships, and even into the soil and air around us. I looked at my barren, weedy garden and saw a stark reminder of what my own heart and life could become.

The moment anger left, I could breathe again. My face and my hands softened, opened. That afternoon I went out into our island jungle with my sons for more berries. And hours later, we added another case of sweet ruby-colored jam to the stores in the attic. Rather than waste my time seething in bitterness, I was able to savor the sight of the waist-high tower, knowing there would be enough to feed my husband, sons, and friends all winter long. My garden was back in bloom.

for the anger of man does not achieve the righteousness of God.

Therefore, putting aside all filthiness and all that remains of wickedness, in humility receive the word implanted, which is able to save your souls.